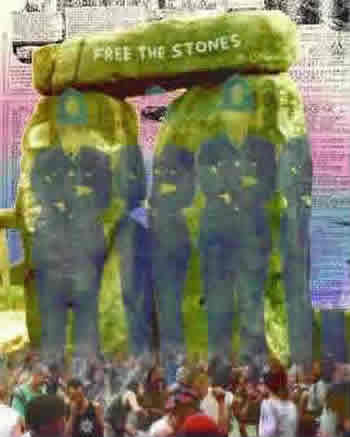 The historic summer solstice of 2000 I had seen estimates of anything from 10,000 to 100,000 as the expected turnout at Stonehenge for Solstice Y2K - the first time that these ancient stones would be open to the public in fourteen years. I had always cherished my childhood memories of clambering over these ancient stones, unencumbered by fences and unlittered by underpasses, a nearby carpark and the usual tourist facilities.

There had been an early meeting at the Drome, called by Arthur Pendragon, who had played a constant part in the negotiations with English Heritage. They had agreed to open it on condition that it was self-policed - by us. They wanted, within the sacred stones, no fires, no dogs, no amplified music, and no long-haired people (just joking on the last one). The stones would be open from 11pm to 7:30 am, at which time we had agreed to vacate it, though there was much discussion on just how to do this.

We had left London early to avoid the rush, but the only congestion en route was getting out of London.. There were just a handful of police dotted about Stonehenge perimeter as we arrived, and no evident laybys full of police vans. Three coppers waved us into the large field allotted for parking/assembly and now it was our guys now in the yellow jackets, smiling as they waved us through. There was a palpable feeling of peace and magic in the air. One just knew that this was going to happen.

And it did. At 11pm we entered the Stonehenge field, not through the tacky tunnel, but through a hand-held Druid archway and across the field from the west. It was a charged and emotional moment as everyone went and touched these ancient stones - soaking up the millennia of vibrations stored therein. As the area filled, we were filled with the feeling that this was a turning point of some sort - a re-union with the spirit of Albion unmarred by conflict with the Roman-trained authorities who have been suppressing such activity for far too long.

The night was historic - a gathering of special people who had made the pilgrimage despite the accurate forecasts of cloud cover and rain. The stones were filled, and there were only a few cases of bad-vibers who never managed to change the euphoric mood of those assembled. For a change, the few would-be troublemakers were not in uniform. Many performance artists were there, with fire and drums and dance. The Samba Band, veterans of numerous direct action parties, were weaving their way with some difficulty through the crowd. It was not an organized event by any stretch of the imagination and more seemed to be happening at times outside the stones than within, where a large crowd stood, sat, and milled about.

The occasional white-frocked druid was evident, but on this sacred occasion their main efforts seemed devoted to stopping people from climbing stones or having fire within them. The main policing, however, was done by the elements, ,with a steady light drizzle much of the night. This quickly weeded out those with the wrong attitude and brought the numbers down to perhaps a few thousand for sunrise. As this special moment came and went it was impossible to visually detect just where the sun was rising , such was the even greyness of the cloud cover.

By 6:30, an hour before the agreed departure, there were just a few hundred of us remaining, most now within the circle of the stones. A small group of musicians were putting out a spirited tune , led by a young woman named Penny playing the pipes. She was awesome, and for the first time in the evening the crowd was gathered into a unified and co-ordinated experience as we all danced within the stones.

Sun finally made an appearance, cheered by the crowd, and continued with its blessing as blue patches raced across the sky. Arthur mounted a small stone around 7am to announce that we should start leaving soon, to meet the deadline. Penny continued piping, the band kept playing and the people continued to dance. As 7:30 came and went, a few more police entered the area, looking relaxed. One woman advised the uniformed ones that we were running a little behind schedule, to compliant nods. Arthur was starting to look a little nervous about the over-run but then the rain returned, bringing events to a close as we all departed, glowing with that privileged-to-have-been-there feeling.